The Nigerian 4th republic began in 1999, with the handover of the Military Government to Rtd. General Olusegun Obasanjo, who was elected president on the platform of the people’s democratic party (PDP). The Nigerian constitution legislates that elections be held every 4 years, across all offices; the Executive, the Legislative and the Local Governments. As a result, as at 2018, Nigeria had seen 4 successful democratic elections and is gearing up for a 5th by February 2019.

Nigeria has over 250 tribes living within its borders. Its six (6) geopolitical zones are often considered to be divided according to its socio-cultural segments, with each region being heavily populated by a tribe/group of ethnicities. Overall the North East & North West parts are dominated by the Hausa-Fulani ethnic group as majority, the North Central by a varying number of ethnic minorities, the South West by the Yoruba ethnic group, the South East by the Igbo ethnic group and the South-South is also divided and jointly shared by a group of minority ethnicities.

The country has a population estimated to be about 196 million people (according to the United Nations DESA, Population Division) and is expected to grow to a population of over 233 million people by 2025 (Khorker & Kashiwase, 2015) with the North West & North East driving most of this growth, as the average birth rate of a woman in Zamfara is 8.4 children (Nigeria: Standard DHS, 2018), and infant mortality rate in the state is about 104 per 1000 children i.e (10%). 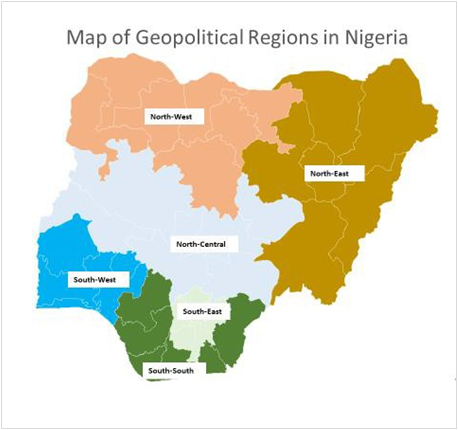 Pollit Analytics conducted a survey in 2017, to assess a variety of subjects one of  which was the level of civic engagement across the six (6) geopolitical regions in Nigeria. The survey had a representative sample of respondents across the 36 States and the Federal Capital Territory. The chart below indicates Voter’s Card ownership and Voter’s participation in at least 1 previous presidential election: 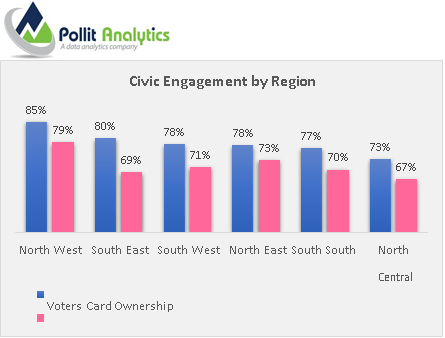 Zooming in on each region

The North-West: The region is home to the city of Kano, the city with the highest population in Nigeria going by the past 2 Nigerian Censuses (1999 & 2006). The region also has the highest civic engagement with 79% of the respondents saying they have voted in at least 1 Presidential Election since 1999.

This region due to the population of such states as Kano, Katsina and Kaduna is home to many active voters, with over 80% of Kano and Katsina State respondents reporting to have obtained a Voter’s Card.

The South-East: This region has the second-lowest level of Civic Engagement amongst all 6 geopolitical regions. The survey results revealed 80% voter’s card ownership, whereas only 69% of respondents claim to have voted in at least one presidential election since 1999.

The South-West: In this region, 78% of those who responded to our survey, report having obtained a Voter’s card. When asked if they ALSO had voted in any presidential election since 1999, only 71% responded in the affirmative i.e “Yes”.

The South-South: The region is home to Nigeria’s oil rich states such as Rivers & Akwa Ibom States. 77% of respondents in this region report owning a voter’s card, while 70% of these respondent’s report having voted in at least one election since 1999.

This chart shows the degree to which each of the 5 other regions prefer the sentiment “Candidate’s suitability for the job”.

Fig 4: Chart showing the variation of Sentiments for “Candidate’s Suitability for the Job” by Region excluding South West.

For more details on Civic Engagements in Nigeria broken down by Demographic and Socio-economic components, contact us at info@pollitanalytics.com

Pollit Analytics Limited is a Data gathering, polling and analytics company focused on preserving and analyzing useful data in social utilities space. Our ambition is to make Data available, meaningful and impactful across Nigeria. We have 3 key business areas: Data gathering, Polling and Predictive Analytics. Our clients include private individuals and organizations, political parties and public officers that use data to enhance the efficiency of their mandate and use it to keep track of their goals and objectives.

The post Research on the level of civic engagement in Nigeria appeared first on World Association for Public Opinion Research.